How to Know When to Stop Editing Your Novel

You did it. You finished your novel. Well, at least the first draft. So you edit it for plot holes, then for sentence structure. Then for grammar and punctuation mistakes. NOW it’s finished. But wait, that one scene needs some tweaking. Okay, good. Just tighten the plot and maybe change that character’s hair color. There. It’s done. Almost. On second thought, the symbolism could use a lot of work….

And on and on it goes. The unending loop of editing and ‘minor’ fixes.

When I started writing, nobody warned me about this. Nobody said, “Hey, don’t get lost in the editing wheel! Books (and their authors) have died in there.” And I wish they had. Because I was laughably unprepared for what takes place after a writer finishes the first few stages of editing.

I didn’t know about the endless tweaking, the nit-picking changes, the addictiveness of reconstructing and embellishing scenes. And I had no idea how to tell when it was time to stop editing and just move on.

Much like the penrose stairs in Inception, a writer can trudge up and down the steps of editing their novel, never realizing that they’re not going anywhere. 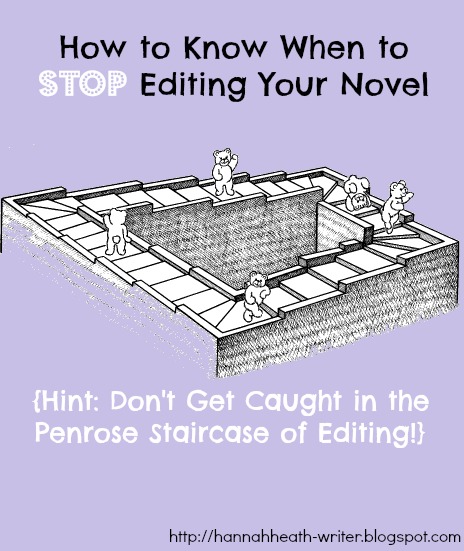 The thought of touching your novel makes you sick. This one is obvious. If you’ve gotten to the point where you have edited, reworked, and thought about this novel for so long that you’re sick of it, well, that probably means it’s time to be done.

You have unrealistic expectations. You’re waiting and waiting for your novel to become perfect. I hate to break it to you buddy, but your writing is never going to be perfect. I know this because I have a completed novel on my hands that I just sent out to an agent. It’s a great novel, but I still feel like it can use work. And of course it still can use work, but I had to accept that I’ve done all I can with it with the tools that I have. The same goes for you. After a certain point, you need to realize that you’ve done the best that you can for now. Let go of that utopian image you have for you novel. Perfectionism kills stories, bores readers, and drives writer's to drink....What? I'm talking about coffee, okay? Don't freak out. The point is this: your book is good. It does not have to be perfect. It just has to be better than it was before.

You are adding entire scenes and chapters rather than reducing the word count. Now, this rule only applies if you’ve already gone through several rounds of both macro and micro editing. If you have already made major changes to chapter structures and plot points, and yet you find yourself going back and adding more chunks of story, then there's something wrong. It either means you are grasping at reasons to not send your novel out into the world or you are being a crazy perfectionist (see above). Both are unhealthy. After you’ve gone through your major stages of editing, you shouldn’t still be making huge changes to the novel. You should either be condensing or walking away.

You haven’t taken a break from editing. You do a round of macro editing, let it sit for a few weeks, go back and do more macro editing, let it sit. If needed, macro edit some more and then turn to micro editing. After the micro editing, you let it sit for at least a month. If you don’t do this, you are going to end up way too close to your novel. No break means that you are going to be up-close and personal with your novel for far too long. You’ll start psychoanalyzing every character, going crazy over every sentence. You need to take a break, step back, and give both you and your novel some space. After that time is over, then you’ll be able to think more rationally about your novel and be able to logically decide whether it’s time to just move on.

You feel like you’re not moving anywhere. If you feel like your editing has hit a dead end and don’t know what to fix next, then you’re probably ready to be done. Seriously. When you notice that your editing isn’t necessarily making your novel better, or (horror of horrors) notice that it’s making the book worse, then shut it down. You’ve agonized over this enough.

You can read it without blushing at the thought of having others read it. This is a good indicator that your story is ready. Okay, so you may feel a bit uncomfortable letting others read it, but that is normal and very different from feeling actual embarrassment about your work as a writer. If the thought of letting somebody read your story doesn’t fill you with shame and if you don’t find yourself making excuses for it every time you send it to someone, then you should be fine.

Making the decision to stop editing and send your baby book out to literary agents is difficult and scary. Many writers have the tendency to be crippled with insecurity and thus fall back on editing to postpone the inevitable. Don’t let that be you. It’s important to be able to recognize when it’s time to stop editing and move on.

It's easy to get caught in the penrose staircase of editing. Try to stop and look for flags that might be trying to tell you that you're going in circles. They may not be as obvious as a lady who's dropped her stack of papers (what, you thought I'd let you leave without slipping in one last Inception reference?), but they are there. Just keep your eyes peeled.

Have you ever finished a book? What made you realize that your novel was ready?

Related article:
5 Steps to Fighting Off Writer's Insecurity (And Your Overactive Inner Critic)
Write What YOU Want To Write: Why You Shouldn't Follow The Current Writing Trend
Be A Writer, Not An Author
Controlling Your Plot Bunnies: How to Write A Novel From Start to Finish Without Getting Distracted